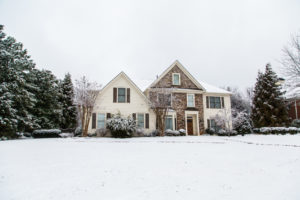 As snow and ice builds up on a roof, it can slide down and fall on buildings, landscaping, building components, people, pets, or livestock. Higher pitched roofs are are often built in areas with cold snowy climates. Sliding sheets of snow and ice is more common because of the steep pitch of the roof.

Sliding snow not only poses risk for anything below, it is also very bad for a roof structures. It often damages the roof shingles and other components as it slides. Just think of how an ice glacier can literally carve through land as it builds, falls off in chunks, and recedes.

A dangerous sliding block of snow and ice is never going to give warning before it falls. So measures are often taken to ensure the roof doesn’t allow it to slide off in sheets, but rather let the snow and ice melt. One such measure is to install a snow retention system to improve the problem. They are also known as snow guards.

Goody’s Roofing Contractors offers snow roof retention installation service on vertical panel metal roofs as well as a full line of other roofing services. We have been Wautoma roofing contractors since 1993, so we are very adept at snow retention system installation.

What Are Snow Retention Systems?

There are various snow guard systems to keep the snow and ice in place. After installation, the buildup melts instead of slides.

Snow retention systems installed on vertical panel metal roofs is very common since the materials don’t hold onto the snow and ice easily. The variance between the snow retention systems come in the form of design and the physical shape of the system.
Snow Retention Systems Protect Roof Components

There are several areas of a roof that are more vulnerable to sliding snow that other areas. A roof has ventilation pipes which protrude through the roof structure from underneath. Around the pipes, a pipe boot is installed. The boot helps protect the roof from leaks and costly repair bills. Sliding snow often damages the boots and sometimes the ventilation pipes.

Sliding snow can also damage roof flashing. Flashing is common around chimneys and other areas where roof components meet. It is installed to keep rainwater from flowing into the connections between the components or chimney and under roof shingles.

If you have questions or are interested in a snow retention system for a vertical panel metal roof in Wautoma, call Goody’s Roofing Contractors at 920-787-7458 or complete our online request form.

Fill out my online form.